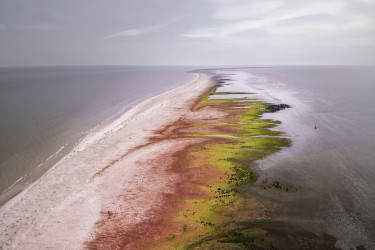 It aims at addressing the fundamental environmental and social challenges in the Danube Delta, promoting scientific education through knowledge dissemination and, ultimately, guiding a science-based policy for the management of the Danube Delta.

The Danube Delta is a Ramsar wetland of international importance. In 1991, the Danube Delta became part of UNESCO's list of World Heritage Sites and was later established as a biosphere reserve.

It is a complex natural laboratory and a rich paleoenvironmental archive of the last 8000 years. The delta is a hotspot for biodiversity and hosts some of the world’s largest reed wetlands which support rare wildfauna. It’s natural resources are commonly shared with its inhabitants, who depend on a healthy and functional environment.

River deltas are one of the most vulnerable Earth System features due to their proximity to the present sea level and a high sensitivity to environmental forcings. By 2100, deltaic environments will face increased pressures due to sea level rise, changes in river discharge and changes in wave climate which may tip river deltas into severe erosion and land loss. Deltas are already facing increased erosion, a situation that will be exacerbated by augmented human pressure. This presents a major challenge for climate change adaptation for the inhabitants of the Danube Delta and hundreds of millions of people worldwide who live in deltas. Additionally, water pollution with heavy metals and plastics, eutrophication and overfishing can impact the health of its inhabitants and the environment.

Any new local, national or transboundary policy measures should consider the special ecosystem characteristics, natural and cultural heritage sites, as well as the future stressors that will act on this system. Delta Science brings together all areas of science related to the genesis, evolution and functioning of deltaic environments (e.g.: geology, water science, environmental chemistry, population science), including the human society. Delta Science is envisaged as a series of lectures delivered by members of the Romanian Young Academy and leading international researchers on the most important issues of our environment and society, fostering the dissemination of cutting-edge science and interdisciplinary collaboration. A main output of the Delta Science project will be the publishing of a report documenting the present state and future problems of the delta.